“The Five A’s to Success”
Kick off the year with Trojan pride and hear an update on USC athletics.

Biography:
Mike Bohn has more than 25 years of experience in collegiate athletics administration and an established record of integrity and strength in critical areas including compliance, recruiting and athletic excellence. He provides strategic and administrative oversight of the USC athletics department, including the university’s 21 women’s and men’s varsity teams. In his almost two years at USC, he has hired new head coaches, made progress on many capital construction projects, and led our student-athletes through an unprecedented year of suspended athletic activities. Prior to joining USC, he held leadership positions in athletics with the University of Cincinnati, University of Colorado, San Diego State University, University of Idaho and Air Force Academy. Bohn holds a bachelor’s degree from the University of Kansas, where he played quarterback for the Jayhawks football team and competed as a member of the baseball team. He earned his master’s degree in sports administration from Ohio University. 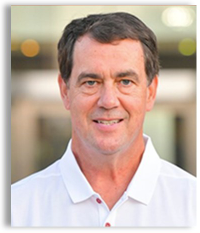